I'm not sure which one is worse... 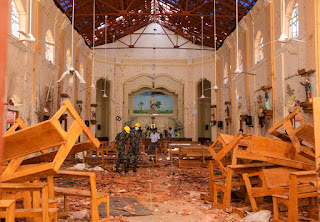 On the one hand we had a gang of murdering animals like ISIS on a bombing spree in Sri Lanka on Easter Sunday, killing over 300 people.

And less than 24-hours-later - literally, almost on the very same day - we see the bloodsuckers exploiting it for attention and money on the internet.

I had written before about how almost immediately after some tragedy - from the Boston marathon bombing to the various mass shootings - we see the grave robbers, the bottom-feeders of the conspiracy culture posting their demented alternate theories about "false flag" attacks and "crisis actors." Except in the case of the Sri Lanka attacks, these "alternate news" sleaze bags like State of the Nation and the Millennium Report posted their theories about false flag attacks within a few hours of the news breaking from Sri Lanka.

Check out this link to State of the Nation about the Sri Lanka false flag theory and note how it links to the Millennium Report. The two sites are virtually identical, with State of the Nation regurgitating almost everything that appears on Millennium Report, from its anti-vaxxer nonsense to its plethora of delusional stories about prophecies and Pizzagate and massive deep-state conspiracy theories.

And yes, I admit that this is not any sort of measured, civil piece of discourse on an important issue of the day. But how much civility is warranted when we have a grimy little cottage industry of paranoia thriving on the internet today? How much civility do we owe people like State of the Nation, and Alex Jones, and Millennium report, Before it's News, and Sheila Zilinsky and their ilk who capitalize on death and suffering, who exploit grief so they can make money off their web pages, podcasts, and YouTube channels. Can you not see each of these lowlives jumping with glee, with absolute pleasure every time we have another story of mass destruction, mass murder? The higher the bodycount, the more opportunity there is to make a quick buck of the gullible, the paranoid, and the alienated.

Looking at the sickening handiwork of killers...or looking at the people who cash in on the murders by spreading even more fear, even more paranoia through their conspiratorial BS. I'm really not sure any more which of the two sides is actually worse.

By the most basic definition of the word, they are both "terrorists."
Posted by Barna W. Donovan at 8:38 PM 1 comment: Links to this post

Time to call garbage what it is... 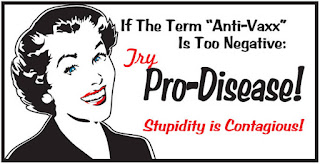 So this article was brought to my attention and I scratch my head and wonder how historians and anthropologists in the future will make sense of the early 21st century, a time that appears to be going insane. Long after the atom has been split and men walked on the moon, we wind up in a world where scientists still need to waste their time explaining to adults that the Earth is round and that vaccines that have been administered to people for generations are not causing autism. Worse yet, as the CNN piece above argues, science seems to be losing the social media war to the anti-vaxxers!

And that is where the article asks an important question. What can science and academia do now? Has the war for the minds of the alienated, the troubled, the naive, the paranoid, those so far on the fringes of modern society as to be seeking a community among those who reject all consensus reality, been completely lost?

The answer, hopefully, is 'no.' But what science needs to start doing is what it has dreaded for the longest time. They need to engage the trolls. The thinking among scholars has so far been that replying to the various "truther," "crisis actor," anti-vaxxer and flat Earth conspiracy theorists was a mistake because it gave such charlatans and con artists attention. But this sort of don't-feed-the-trolls approach has not been working. When we are seeing a sudden surge in measles outbreaks because fearful parents have been deceived into withholding life-saving vaccinations from their children, science and academia must fight back. Science must develop a public relations campaign for an evidence-based, rational world view, for a belief system that must be based on objective, quantifiable truth. And science and academia must start finding the nerve to do something they had so far loathed to do. They need to "lower themselves" to the level of the anti-vaxxers and conspiracy theorists. They must call the frauds, the con artists, the hustlers like Alex Jones, Call for an Uprising, and State of the Nation parasites exactly what they are. People running the conspiracy and "alternate news" web sites, podcasts, YouTube channels and blogs are blood-suckers and bottom feeders who spread disease and death for a quick buck in online advertising.
Posted by Barna W. Donovan at 8:54 AM 2 comments: Links to this post

Labels: A Call For An Uprising, Alex Jones, anti vaxxers, conspiracy theories, State of the Nation 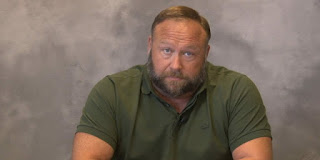 I’ve been following the latest news stories about Alex Jones’ legal troubles with a sort of nauseous fascination. The latest twist in the defamation lawsuits brought against him by Sandy Hook families is Jones’ attempt to worm his way out of taking responsibility for inciting the harassment of these families by claiming that he was a victim of “psychosis.” You can check out the particulars of the case in this story in the Columbia Journalism Review, or by just Googling Jones’ name. The “psychosis” story should be among the first that pop up during your search. (Because, of course, the Insiders and the New World Order controlling Google are doing their best to tear a truth-teller like Jones down)

But basically Jones is up against a wall in court and he claims that it was a form of temporary insanity that made him claim for years that the Sandy Hook shooting – like numerous other mass shootings he had been bloviating about – was either a “false flag” attack or a hoax using “crisis actors.” This is similar to the time he claimed in court during his divorce proceedings that the things he talks about on his program are a form of “performance art.”

The reality is probably closer to his so-called performance art. Or, to put it more accurately, a con job. Jones, I am certain, has never suffered any sort of psychosis that drove him to spout all of his illogical, contradictory, unprovable mountains of horse turd on his show. He is a showman who has been telling his delusional, gullible, alienated fans exactly what they want to hear. No psychosis there, only an absolute and utter lack of scruples.

With this psychosis claim, one can see that he is also a pathetic coward who can’t bear to admit any responsibility for his reprehensible behavior and take the consequences like a man.

But the reason I am nauseated by all of this is because I think of all the people who still listen to him and take all of his words as gospel. No matter that their idol admits to being either a liar or mentally unstable, his fan base will still continue to hang on his every word, believing in all of his claims of NWO and Illuminati and Insider conspiracy theories.

So Jones is at least partially right when it comes to his fans. Believing in these conspiracy theories is a form of mental illness.
Posted by Barna W. Donovan at 7:52 PM 2 comments: Links to this post