THE NEXT BIG THING 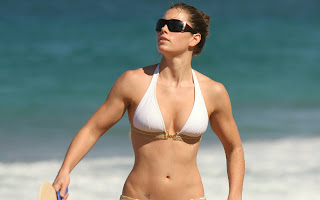 Since I've been away from blogging for quite a while, the perfect opportunity to start writing here again came by way of Malachi Stone's invitation to contribute to The Next Big Thing novel-in-progress chain.

So here is my next big thing:


1. What is the working title of your next book?
THE CONSPIRACY THEORIST

2. Where did the idea come from for the book?
Should I be embarrassed to say it was inspired by film and reality TV? Well, it actually was. I’ve been fascinated by and a big fan of “found footage” films like the PARANORMAL ACTIVITY franchise, CHRONICLE, and all the dozens of other similar films. So I asked myself how this reality craze could be translated to literature. How about a novel written in the voice and style of a nonfiction book, using devices like footnotes, interviews with experts and commentators on the plot, appendices of excerpts from secondary sources, and a bibliography?

3. What genre does your book fall under?
I would put it under mystery, or perhaps thriller. How about “literary crime thriller”? Well, if it’s “literary” it sort of sounds pretentious and kind of boring, the sort of thing that’s hard to follow and understand and it might scare a mass audience away. So let’s just say mystery. When I feel a bit egotistical I would like to think that it will create its own subgenre…”fictional non-fiction” maybe.

4. What actors would you choose to play the part of your characters in a movie rendition?
For my title character, the charming charlatan of a conspiracy theorist Shane Conroy, LOST’s Josh Holloway (Sawyer) keeps popping into my head.

For his ill-fated girlfriend, champion fitness competitor Rose Bedford, I would ask my people to do lunch with Jessica Biel’s people. Remember her in BLADE TRINITY? That’s about Rose’s look…well, perhaps if she pumps a little more iron. Jessica Biel with the Linda Hamilton, TERMINATOR 2 muscles.

5. What is the one-sentence synopsis of your book?
Accused of murdering his girlfriend, a best-selling – and completely sleazy and fraudulent – conspiracy theorist becomes a fugitive and an international superstar by claiming he was framed by “a vast global conspiracy” for “getting too close to the truth.”

6. How long did it take you to write the first draft of the manuscript?
About 14 or 15 months, I think. I lot of time went into the crime scene investigation-technique research. That and the trial and error method of the experimental format took quite a while to finish. Actually, making the experimental fake-reality format work is still taking plenty of time in the ongoing revisions.

7. What other books would you compare this story to within your genre?
I recently read STILL MISSING by Chevy Stevens and saw a lot of elements in it that I use in THE CONSPIRACY THEORIST. Stevens’ parallel story lines surrounding a woman’s kidnapping, which are not always chronological in order, are something I use as well. I would also compare it somewhat to the style of Michael Crichton’s THE ANDROMEDA STRAIN, reading as if it was the report of a real incident. My description of the plot has also been compared to Elizabeth Kostova’s THE HISTORIAN.

8. Who or what inspired you to write this book?
The first inkling of the idea to write this book came to me two years ago because I’m not a football fan. During Super Bowl Sunday I found myself flipping the channels, staying away from the game, and came across a Biography Channel documentary about the real people involved in the Amityville Horror case. In the detailed history of all the people involved in the supposed haunting, the alleged hoax, the books and feuds between various writers calling each other liars and con artists, I realized that the drama of all these people trying to make money off of this obviously phony ghost story was much more interesting than the story of the house itself. So I had this idea of writing about something allegedly otherworldly or fantastic but not focusing on the phenomenon itself but the personalities of all the people surrounding it and the ways they try to exploit it, the way the media help the story distort.

Hmm…Can I call it “Tom Wolfe meets The X-Files”?  Or “Bonfire of the Conspiracies”?

9. What else about this book might pique the reader’s interest?
Think about how outrageously successful some conspiracy theorists are these days. Some of them have top-rated radio shows, web pages getting tens of thousands of hits every day, and best-selling books blaming Midwestern tornadoes, the Batman shootings in Colorado, hurricane Sandy, and just about every single event in the world on conspiracies. Now if one of these people were accused of a crime, what would they say? That they were framed by a conspiracy? And would it affect their success at all, or would their fawning, paranoid fans rally around a “victim” who was set up by “shadowy forces?”

Or how about a tagline: “What if Agent Mulder was the bad guy?”

And now the torch passes to Jennifer B. White.