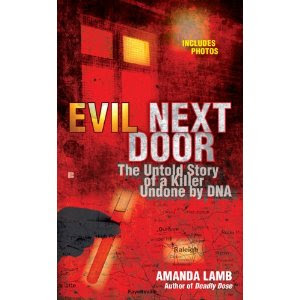 The latest episode of Culture Wars - originally broadcast on April 22 on WSPC radio - is now available for podcast download right here.
Our special guest was WRAL reporter and true crime author Amanda Lamb. Her latest book, The Evil Next Door: The Untold Story of a Killer Undone by DNA, has just been released. If you are interested in high tech detective work and the hunt for an elusive serial killer, be sure and check this one out.
And, of course, check out the next episode of Culture Wars live this Thursday from noon until 1:00, EST!
Posted by Barna W. Donovan at 4:44 PM No comments: Links to this post

A Breakthrough in Seismology

You might not need too much time to wrap your mind around this story. Check it out here. An Iranian cleric has just declared the true cause of earthquakes: promiscuous women who dress too provocatively.

OK, so not so surprising, right? Ultra fundamentalist religious zealots tend to say loony things like this. The Iranian theocracy is not made up of too many folks who tend to say too many intelligent, rational things about natural phenomena in the world.

Except doesn't this guy sound like someone who might have a good time hanging out with Pat Robertson?

Kinda disturbing, isn't it?
Posted by Barna W. Donovan at 4:31 PM No comments: Links to this post

…by adopting all these kids from Russian orphanages!

So, does that sound a bit harsh? It’s just a thought I had after reading the latest about the case of the Tennessee woman who adopted, then returned, a Russian orphan. Check out the article right here.

Apparently more information is coming out about what happened between this boy, Artyom Savelyev, and his mother and what seemed to have prompted her to return the kid to Russia. According to the woman’s mother, her daughter had been living in fear of her adopted son. The kid was given to violent tantrums and rages when criticized or subjected to the most basic rules and regulations. Apparently he was given to screaming at, spitting on, attacking, hitting, and threatening his mother. The kid would regularly threaten to kill his mother and burn her house down.

Now that Artyom has been sent back to the homeland, the Russian adoption authorities are expressing outrage and they have stopped all adoptions by Americans. Some good old-fashioned America-bashing is, no doubt, soon to follow. Just keep an eye on this story and see if I’m right. We will very soon start hearing the propaganda about the pampered Americans who want it easy, want to take perfect kids, and who can’t deal with the realities of international adoption.

What some American might not be able to deal with is the adoption of certifiable sociopaths.

So let’s take a look at this case from a starker, more politically incorrect – yet honest and realistic – perspective. Realistic perspectives can often be a bit unpleasant and politically incorrect, after all. The fact is that Americans are the most generous and altruistic people in the world. Every time a volcano blows or a hurricane hits or an earthquake or fire or flood or a tsunami wrecks some part of the world, the first people sending in the donations are Americans. The people sending in most of the donations are Americans. The first relief workers in all these disaster areas will be Americans. Most of the food sent to refugees in war-torn African countries is sent by Americans (to be stolen by local war lords and corrupt governments). When Americans see the little orphaned babies in Russia or China or Romania or any of these impoverished countries, they will get teary-eyed, they will think of Pastor Jones at Sunday services telling them to do their part for social justice, they will listen to Madonna and Angelina Jolie, and they will rush to adopt one of these kids. In return, what they stand a good chance of winding up with is a nightmare visited on them by the dishonest adoption services of those countries.

The fact is that many of those foreign orphaned babies have been abandoned by the lowest dregs of those societies. Perhaps the outraged Russian adoption service didn’t mention that little Artyom’s mother might have been a drunken, drug-addicted prostitute who got knocked up by a john in a back alley and that she probably shot heroin throughout her entire pregnancy. The sort of impulsive, violent behavior described in the story is perfectly symptomatic of the children of drug users. Furthermore, the behavior sounds like that of the perfect, textbook-case sociopath in his early years. Once little Artyom got a few years older, he just might have killed his mother in her sleep and torched the house.

The real villains in this piece are not the Americans who reached out to help abandoned kids, but the corrupt Russian adoption services who can’t give accurate medical histories of the children they placed with adoptive parents. There are a lot of orphaned and abandoned children in the U.S. who need adoption as well, and a system that is honest when it comes to “special needs” children. Americans looking to adopt should start at home.

So the woman who sent Artyom back to mother Russia, given the emerging facts of this case, did nothing wrong. Perhaps she saved her own life.

And little Artyom might one day grow up and have a successful career in the Russian Mafia.
Posted by Barna W. Donovan at 3:44 PM 2 comments: Links to this post

OK, this was a pretty lengthy New York Times article I still can't quite sense of: http://www.nytimes.com/2010/04/07/dining/07camera.html

If you have an uncontrollable compulsion to photograph food and post it online, you might want to check it.

I'm especially unsure of what to make of the psychobable explaining it.
Posted by Barna W. Donovan at 5:17 PM No comments: Links to this post