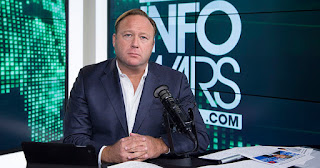 So this was certain to happen within hours, if not minutes of a tragedy like the Parkland, Florida mass shooting. The conspiracy theorists peddling their "false flag" scenarios are flooding the internet with claims about the shooting being a hoax and the victims and survivors being crisis actors. Some kind of a sinister "They" are behind the shooting to enact gun-control laws and take away our freedoms and advance the agenda of the Illuminati and the "globalists" and the "international bankers" and so on and so forth.

I'm fascinated by just who exactly "they" are supposed to be right at this moment. In the aftermath of the Colorado theater shooting and the Sandy Hook massacre, "they" were the liberal minions of Barack Obama, with Obama supposedly masterminding and pulling the strings behind the killings to advance his gun control agenda. But how about now? With Donald Trump in the White House and Republicans holding the legislative power at the moment, can this conservative power in Washington also be a part of this shadowy, malevolent "them?"

Oh, wait a minute, "they" control everyone, right? Conservative, liberal, libertarian, everyone. They pull the strings from the Bohemian Grove and Denver International Airport and Area 51 and the meetings of the Bilderberg Group. OK, got that. Sure! Conspiracy theorists like Alex Jones have exposed all of that. Gotcha!

Actually, making sense of these sorts of demented fantasies is similar to sitting down and trying to discuss logic with the inmates of a lunatic asylum. But at least the ever more critical coverage of the conspiracy subculture by the media is becoming somewhat heartening, like in this piece on CNN. No longer do these people seem to be ignored as goofy, colorful, and ultimately harmless group of cranks who exist on the fringes and harm no one. Their maliciousness and utterly shameless sleaze is finally being called out for what it is.
Posted by Barna W. Donovan at 4:46 AM No comments: Links to this post