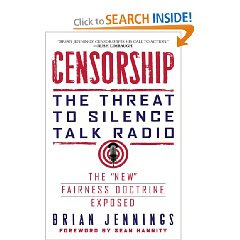 Here's an interesting-looking book I just ran across on amazon.com I'm considering putting on my summer reading list. It might just be a good beach read...hopefully. It's called "Censorship: The Threat to Silence Talk Radio."
According to its description, the book is a criticism of the Fairness Doctrine which, in my opinion, should never be reinstated. Its effect will certainly NOT be more ideas and points of view in broadcasting but less. This is a historical fact. During the years the Fairness Doctrine was in effect, there was a lot less politically oriented, opinion-oriented broadcasting than there is today. If broadcasters had to balance every single point of view with a counter argument, they just played it safe and easy and tried to avoid as much controversial talk as possible.
Today, of course, most of the folks afraid of the Fairness Doctrine are the conservative radio talk show hosts and their fans. Programs by Rush Limbaugh or Sean Hannity or other conservative pundits would not exist under the Fairness Doctrine.
Now the book Censorship appears to be a strictly conservative-point-of-view critique of the Fairness Doctrine. Hannity even writes an introduction to the book. To be fair, though, the back of the book jacket even carries an endorsing blurb by arch-liberal Alan Colms.
While I am opposed to the Fairness Doctrine on principle, I am only a little bit skeptical about the commitment to free speech of what has recently emerged as the "conservative base" of the Republican party. These, by the way are the Moral Majority types, the ultra-right-wing fundamentalists who also rail against the "smut," "indecency," and "filth" of so much of TV broadcasting and shock jocks on other radio programs. You know, the Parents Television Council types. So I'm curious if this conservative defense of freedom in broadcasting is honest, or if it's merely a few disingenuous ultraconservatives talking the talk to save right wing radio while they would back the censorship of anything else they deem "offensive."
Posted by Barna W. Donovan at 8:56 AM No comments: Links to this post 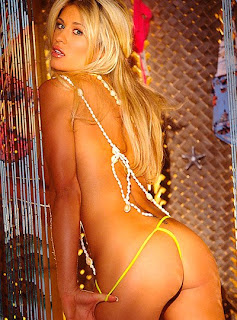 Well here are just a few more reasons why I definitely don't want to move to either China or any country run by a fundamentalist Islamic theocracy. These two stories about web surfing in the not so free world just sealed the deal. Check them out here and here.
Aside from being identified by Reporters Without Borders as the country that exerts the most censorious control over the Internet in Asia, China is also deeply concerned about the moral rot Internet pornography may bring about in young and impressionable minds. Therefore, they want to censor the Internet even further. All computers sold in China, apparently, must be fitted by porn-blocking software. As an educator of college students who understands the importance that rest, relaxation, and entertainment to overstressed and overworked students, this sort of censorship just appalls me! It APPALLS me!!!
The second piece about the new Microsoft search engine, Bing, seems to hint that some software developers might have been Boy Scouts in a previous life. They plan ahead. Apparently versions of their software marketed in Islamic countries already have blocking functions built in, not allowing access to pornographic videos.
While this is an entirely easy shot to take, I will definitely take it...because it's just so much fun and so satisfying: The censorship of so-called "smut" and "indecency" usually goes hand in hand with general censorship, intolerance of dissent, and totalitarianism. Those are words - meaning "totalitarianism," "dissent," and "intolerance," - such American guardians of morality like the Traditional Values Coalition, the Family Research Council, and (my all-time favorites) the Parents Television Council should look up in a dictionary.
And I think I will now check out some of the search functions on Bing...
Posted by Barna W. Donovan at 8:49 AM No comments: Links to this post

In light of today's developments in the case of journalists Laura Ling and Euna Lee, imprisoned by North Korea's psychopathic regime, I would very strongly encourage the support of an organization we spoke to earlier this spring on the WSPC Culture Wars radio show. Reporters Without Borders documents the repression of free speech and journalists around the world and helps fight for the release of incarcerated reporters everywhere. Check out their web page, sign their petitions, and give them what support you can.

You can listen to our interview at http://culturewars.libsyn.com/ or by subscribing to the show for free on I-tunes.
Posted by Barna W. Donovan at 6:14 PM No comments: Links to this post 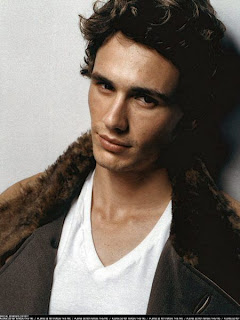 Well, graduation season is upon us (or for some of us, like yours truly, it has already passed...St. Peter's College, where I teach, had its graduation ceremonies on May 17).
But I was just amused to see what a class of true Einsteins UCLA is unleashing on the world in its graduation class of 2009.
According to this story, a large number of UCLA students were outraged that the actor James Franco (Spider-Man, Pineapple Express) was going to give a speech at their commencement ceremony. Franco had received his UCLA BA degree last year (he had first enrolled in the university in 1996). But a lot of UCLA students, it seems, are not happy with this. They feel that he "hasn't had time to accomplish anything with his degree" since his graduation.
This is the reason for rejecting Franco? Are you out of your fracking minds?
There were probably a lot of really outstanding keg parties and a great deal of excellent dope smoked by the UCLA student body over the last four years.
How about letting him speak because he is a person who obviously does not need a college degree to make a living these days but still valued education enough to get that degree? Maybe he would have said something like he completed his degree and now wanted to let other students appreciate the value of knowledge for its own sake and beyond the dollar value of a salary.
Franco, apparently, said that he backed out of giving the speech because of work conflicts. It's a reasonable way to safe face.
But at least he's probably happy that with a degree from UCLA, he just might look forward to a promising career in the entertainment industry.
Posted by Barna W. Donovan at 12:03 PM 1 comment: Links to this post