All the mixed feelings over V 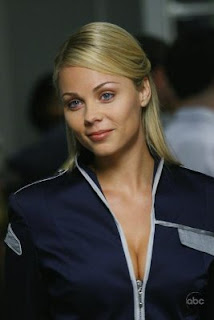 Hmm…I just finished watching the last episode of V that ABC will air until March, 2010, and although I liked it, I’m still wrestling with too many mixed feelings about it. This is a show I want to love so much because it’s a remake of one of my absolute favorite miniseries and series from my childhood. I really, REALLY want to love this show, although I find myself only liking it. So what is V doing wrong and what is it doing right…?

Tonight’s episode had some nice touches, some good plot twists, some original concepts not in the old miniseries. The psychedelic “bliss” scene was intriguing. I want to know more about just what that whole thing was. We also got to see more of the Fifth Column. The Fifth Column resistance network within the Visitor ranks was also a part of the original V story. The Visitor attempt at slipping some sort of a drug into humans around the world via the flu vaccine was a really great touch of paranoia. I liked that a lot, especially during all the lingering controversy about whether or not the swine flu vaccines are safe. Reporter Chad’s brain ailment was also a great plot twist. Do the Visitors want to operate on him to do something to his brain and keep him permanently under control? Chad might be an ambitious opportunist, but there are hints that he might not be as much of a complete, easily-controllable sellout as his counterpart Christine Walsh was in the old V. Chad, the aliens might reason, could still be too much of a wild card to trust completely. The glimpse of an enormous fleet of Visitor mother ships coming to back up the first wave of invaders looked nicely ominous in the final shot of the episode. And, of course, taking a lead from the original, we find out that there could soon be an alien/human hybrid baby on the way.

But, unfortunately, I still have lingering problems about the new V, a sense that too many great opportunities for drama, social commentary, suspense, and just top-notch science fiction are being missed.

I think the main problem this show has is that it does not have a grand enough, epic enough feel. This show is about all of life on Earth suddenly getting changed overnight. In UFO lore, historians of the UFO phenomenon always talk about an old Brookings Institution belief-system-study where a group of experts from various fields – business, political science, theology – were asked to contemplate what would happen to life on Earth if we had undeniable, incontrovertible proof that there was intelligent life somewhere else in the universe. The result, the experts all concluded, was that major – if not chaotic and dangerous – upheavals in thinking and beliefs would sweep the world. That idea is what V should be about!! I want to see more of the world in this new V and I want to see how day-to-day attitudes and ways of living have been thrown into turmoil by the presence of the Visitors.

What frustrates me is that the producers of the show promised ideas like that when they teased bits and pieces of the show months ago. Now they don’t seem to be following through. When I saw clips of the first episode, with Erica and Father Jack talking about the Visitors manipulating Earth people’s devotion and beliefs, I thought this new V could quite possibly turn out to be something far superior to the old one. While the old V had a larger-scale, more epic feel with a big cast of characters, it tied itself too much to its Nazi allegory. The original V was stuck in the past. This new one has the ability to examine the world today, to look at our own post-9/11 world where everything was suddenly turned upside down, all the old rules re-written within a span of a few hours. The irritating thing is that I think that the show’s production team is smart enough to do this, especially producer Scott Peters, whose 4400 series on USA dealt with exactly those issues.

In science fiction and fantasy literature, authors often talk about complex “world building,” about creating very fully-realized, detailed alien worlds with intricate histories, customs, life forms, governmental systems, rules, etc. V needs to do some complex world re-building. When I’m going to sit down to see more of this show in the spring, I want to see more of Father Jack’s parishioners and what the Visitors in their lives are doing to their faith. I want to see more of Father Jack’s own conflict of faith for that matter. When he was introduced, he had a crisis of faith, but all of that seems to have been forgotten. Furthermore, what did the arrival of the aliens do to other religions? How are fundamentalist religious movements reacting to the Visitors? What did the alien arrival do to the war in Iraq? To Afghanistan? What does the Taliban think of the Visitors? What does the Christian right think of the Visitors? Maybe Chad should be prodded by an influx of e-mails from his fans to ask the Visitors what God – if any – they believe in. Remember how big a part of the plot religious faith was in the film Contact? Or how about politics? What’s going on in Washington while the Visitors are insinuating themselves into every corner of civilization? The first episode hinted that the aliens might have been here for decades and might have taken over and manipulated governments. I hope we see a little more about that.

So far, unfortunately, all we’ve gotten was a small-scale potboiler with only three characters dominating most of the stories. We see Erica and Father Jack worrying a lot and talking about ways to find out what the Visitors are up to. We also see some of Ryan, the Fifth Columnist, also worrying a lot and trying to figure out a way to fight back. Aside from those three characters taking up most of the screen time, now and then Chad shows up for a few minutes, elated over his sudden rise to journalistic stardom. The only character who seems to represent the rest of the world, the people dealing with the sudden, incomprehensible upheaval in their lives, is Erica’s son, Tyler. I also find Tyler to be the most annoying of the lot. He is one of those characters groomed to be some sort of a teen idol, little more than a stereotypical, ego-centric brat who sits around sulking because Mom is working too much and “she just like doesn’t get me, man.” In this episode, sure enough, we saw him sitting in counseling and moaning about how his mother just does not understand and she’s never there for him. His turmoil over the changing world has, so far, gone no further than trying to deal with his crush on the blonde alien babe, Lisa, and how to keep it all a secret from Erica.

V should be a lot more than these small-scale character intrigues. It has the potential to be a truly great science fiction epic if it would only set its sights a little higher and endeavor to something bigger than a tired, oft-seen family melodrama.

Now as I’ve read on some science fiction web pages, ABC apparently has ordered a shakeup in V. We only have four episodes so far because filming was shut down and some of the production team fired. The rumors are that the network had big problems with the way the first four episodes turned out. Well, I have problems with the way these episodes turned out too. And, unfortunately, the ratings of the show fell quite sharply from week to week. So I hope we really do get to see more V in the spring, and to see more ambitious, epic-scale, intelligent, world-building science fiction.
Posted by Barna W. Donovan at 7:58 PM